A simple introduction to the Lightning Network

Just as gold and the dollar have their defects, Bitcoin is far from perfect. Nevertheless, it has one essential feature that the others do not: it is a programmable currency. Bitcoiners can therefore find ways to constantly improve Bitcoin’s protocol and functionality. This is exactly what happened with the Lightning Network.

The number of transactions per second that can be made on the Bitcoin network is limited. The Bitcoin blockchain records new transactions within a block every 10 minutes on average, and the size of each block is limited. Therefore, block space is a scarce resource, which can pose two problems for Bitcoin’s mass adoption:

This block size limitation was introduced and maintained in the interest of decentralization and security of the Bitcoin network, at the expense of scalability. In the trade-off between security, decentralization and scalability, the Bitcoin community chose the first two to ensure the long-term survival of the protocol. The Lightning Network, built on top of Bitcoin, closes the circle by greatly increasing Bitcoin’s scalability. 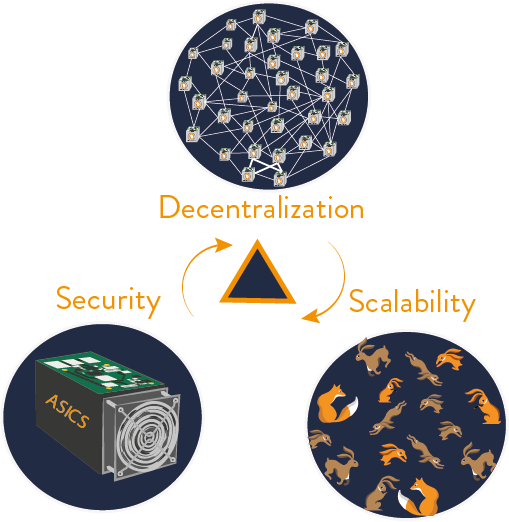 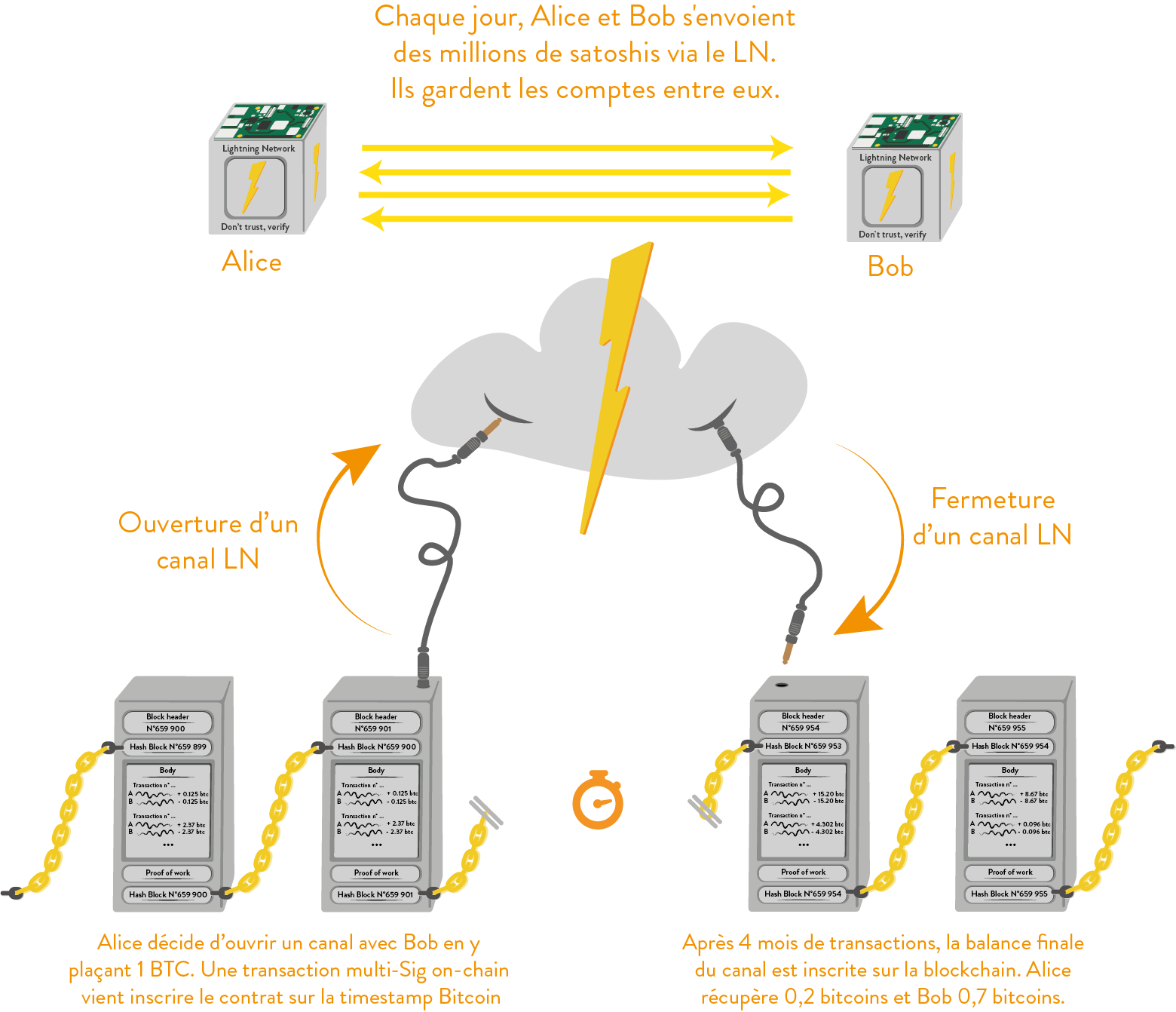 Users can deploy their Bitcoins on the Lightning Network through a Bitcoin transaction, known as an “opening transaction”. Then, once these Bitcoins are “deployed”, they become directly usable and transferrable on the Lightning Network, without having to resort on the Bitcoin blockchain. However, the operation and architecture of Lightning, based on a network of payment channels, means that transactions can be made instantly and at virtually no cost.

These transactions are made directly on the Lightning Network and therefore do not appear on the Bitcoin blockchain. At any time, the user can get his bitcoins back within Bitcoin (in Layer 1) by means of a Bitcoin transaction, the so-called “closing transaction”.

Thus, for the price of two Bitcoin transactions (opening and closing), thousands of transactions can be performed outside the blockchain, directly on the Lightning Network.

When a user deploys bitcoins on the Lightning Network, he will place them in a network channel that he creates on this occasion with another user. He is then at one end of the channel, while the other user is at the other end. The funds can then move in the channel from one side to the other, but without leaving the channel, a bit like a Chinese abacus.

The Lightning Network is therefore a routing network: for a payment to be made, the two actors must be connected via channels with sufficient liquidity and at the right place. So if Alice decides to pay Bob via Lightning, but they are not directly connected, the channels of other intermediate nodes will be used to route the payment.

Section 2 – Use cases of the Lightning Network

The Lightning Network allows for micropayments since the fees are infinitesimal. This opens the door to a new kind of gaming, where players can be rewarded with bitcoin, buy items or trade with each other.

There is even Counter Strike GO! 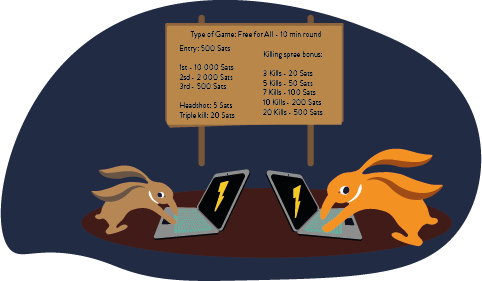 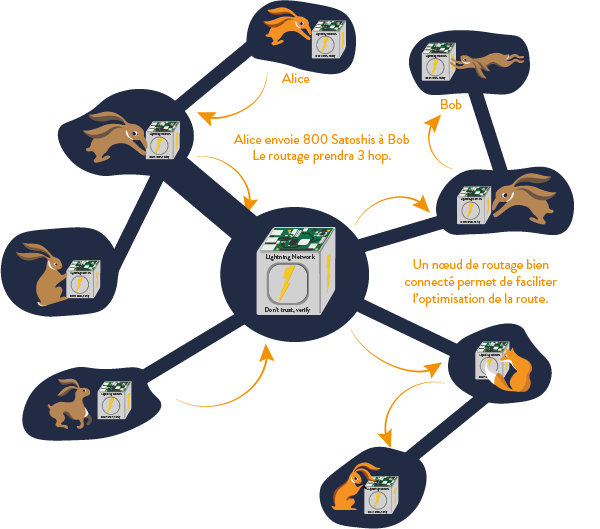 When one of my channels is used to route someone else’s transaction, that other person pays me a fee that I can define.

Thus, the Lightning Network allows people to earn bitcoins (or satoshis) by tying up their own funds in payment channels. All this while keeping full control over their funds!

The routing nodes therefore play a key role in the Lightning Network. They indirectly connect a large number of small users who cannot afford to be perfectly connected to networks (lack of capital).

Even if there are big routing nodes with large liquidity and many channels, a small node can route! The market will decide the optimal path. 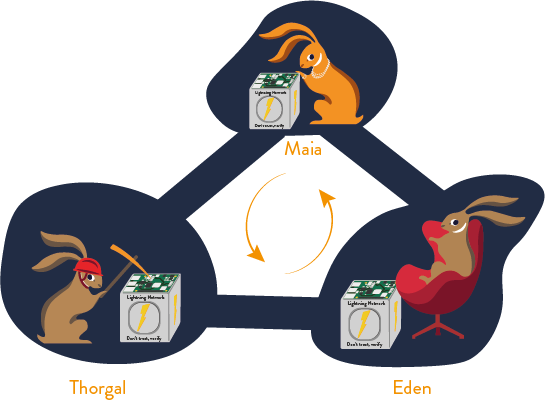 The Lightning Network allows Bitcoin to be used as a daily payment method. Merchants can easily accept payments via the Lightning Network, either by using the services of a provider or autonomously with open source solutions such as BTCPay Server.

It’s important to understand your needs before jumping in, not all businesses will use the Lightning Network in the same way. Some will need a lot of liquidity because of e-commerce, while others will only want to pay employees or suppliers on a regular basis.

Using the Lightning Network internally on a private basis can be a great start to getting into the LN ecosystem.

Heading to the future

Who hasn’t dreamed of being able to buy a newspaper article or a song by the unit rather than having to pay for an expensive subscription? With LN and its micropayments, this model of content monetization on the Internet can finally see the light without friction, which is totally impossible with traditional payment methods (authentication of bank card holders, etc.)

Streaming money is now possible! You can pay your favorite artist or podcaster 10 satoshis per second directly, the money arrives straight to his Lightning wallet without intermediary.

You understood it, LN opens the way to a real economic and technological revolution on the way to imagine social and commercial interactions. New business models are emerging every month and the future is full of innovations! 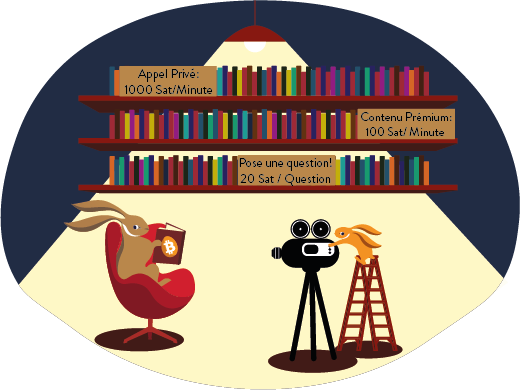 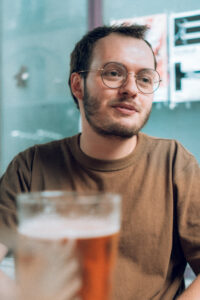 Hi, I’m Rogzy the creator of this project. French Bitcoiner who decided to offer 2 years of his life to change French mentalities on Bitcoin.

Discovering Bitcoin is a long and exciting journey, I hope I can accompany you as far as possible.

We use cookies on our website to give you the most relevant experience by remembering your preferences and repeat visits. By clicking “Accept”, you consent to the use of ALL the cookies.
Cookie SettingsAccept
Manage consent