A social creation of our collective imagination, money has shaped the world since the first civilizations. Why ? How does it work? How do we as individuals come to believe in this myth? In this chapter, we will explore aspects of money.


Collective delusion allowing to store and transfer energy through time.

Money is a fascinating social phenomenon, controlling and shaping our world since its inception. Prosperity and decline of a civilization depends on it because it rules every economical and social aspect of its people.

Money takes many forms throughout history and stays in constant evolution based on its user’s resources and needs. Sea shells, giant rocks, cigarettes, gold or debt, money moves with the times and rules humanity as an invisible master.

Money is embedded in the foundations of our civilization, therefore it is a serious matter. 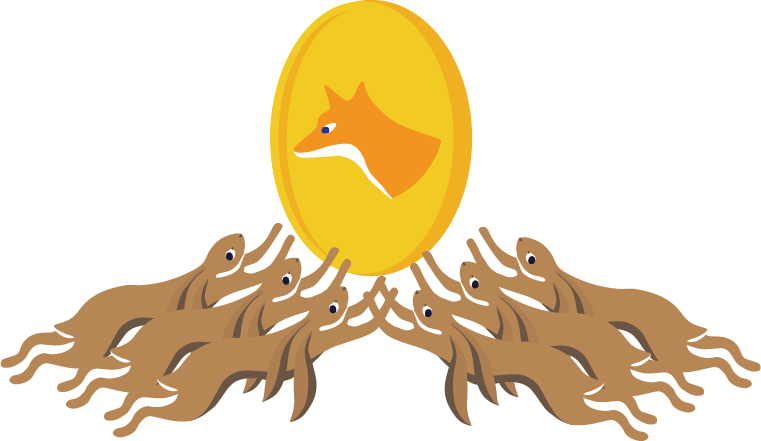 What is the role of money ?

With it, you can communicate from the present to the future. We turn our time and energy into an asset which then can be used in the future without the risk of losing value.

It allows us to speak the same language. Without knowing each other, without even using a common tongue, two strangers can exchange, trade and agree on value.

Its utility in our world is complex to artificially replicate. No human or group of humans can create a currency, it is a natural social phenomenon which must emerge from the market and a voluntary agreement. Prices are signals, informations, which help society to choose how resources will be allocated.

Gold as money is the result of 4 thousand years of monetary darwinism based on three functions: 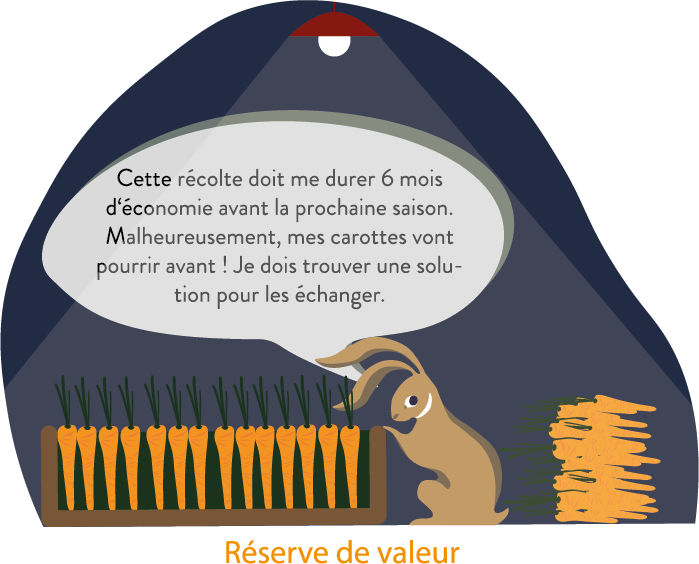 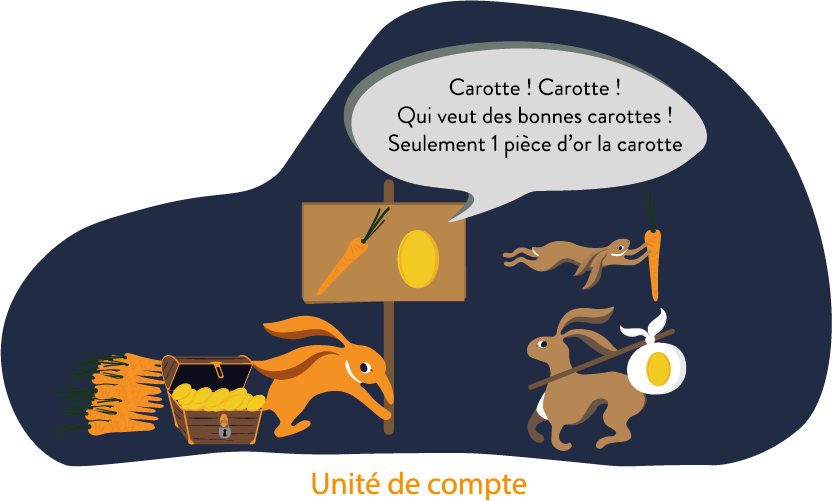 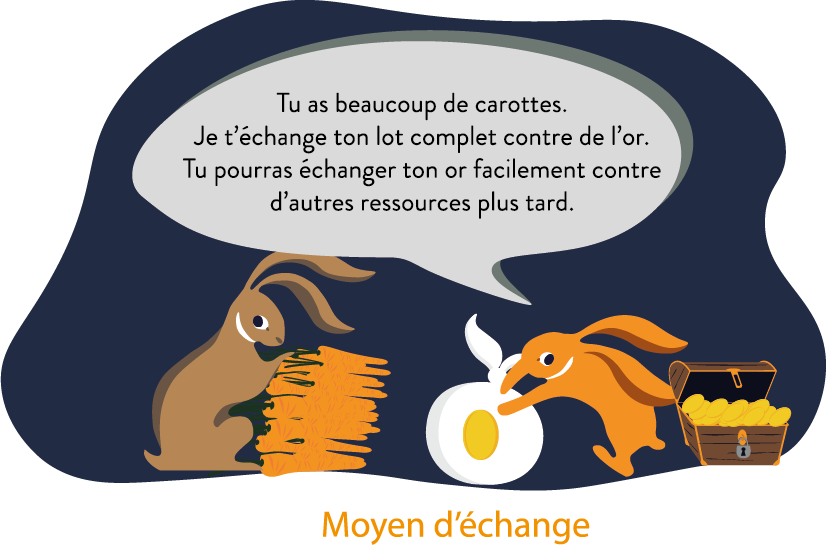 While gold fulfills the store of value function thanks to its chemical properties, it lacks some features to be used daily. In a globalized and digitalized world, gold cannot move with ease and needs a central authority to ensure its divisibility and portability (minted coins).

These flaws made gold a good store of value but not common money, to the advantage of state fiat currencies, easily usable but constantly devalued by the same entities who control them (central bank, king, emperor, dictator, …).

In 2009, Satoshi Nakamoto introduced a new challenger in the currency wars, an alternative solution : a scarce digital currency, divisible and portable.

Money has other important features, therefore we need to ask ourselves if our currency is: portable? Fungible? Programmable? Accessible?

To adopt those features, money evolves by steps:

The value of a fiat currency relies upon our trust in the regulating institutions.

No trust, no value !

We saw that gold has been a global form of money for long, nonetheless, due to its lack of flexibility, states, emperors and politicians imposed fake currencies upon us, also known as fiduciary money.

The idea is pretty simple. Your people use money. Gold works, but you can’t control it. The solution is to hold hostage the gold into a bank using your monopoly on violence granted by the protection social contract. Once you possess the gold, you just offer a currency with a 1:1 change rate while minting your face on it. As the time goes by, you have the upper hand on the monetary system and you can start to slowly debase those currencies by 0.5%, 1% or 2% a year. No one notices it as you do that for the sake of your users’ well-being.

The value of your bank notes melts against your purchasing power. Losers are those who save in fiat money so you can confidently continue to fund tax-free projects, using inflation. Moreover, your debt becomes easier to repay because you owe “less” every year. At some point, you announce that you revoke the gold parity. Your people, well too accustomed to the new currency, financially illiterate and obedient, accept it.

You now have complete control over your state money supply. Your cost to print mind-boggling amounts of money is then close to zero.

If you do it seriously and progressively with sustained growth and trust from the people, you’ll be able to slowly carry on the debasement of your people without anyone having a say about it. If you do it too much at once, you will risk losing control and sparking hyperinflation.

Some day, your currency will not have any quantity of gold left in it (a bit like the coins during the fall of Rome), or will simply be some computer variable totally unlinked from the physical world.

Spoiler alert: we are currently living in a world where the dollar has gone wild and gold is no more the monetary standard of the world. We’re at the end of a century-long cycle and beginning the next one. 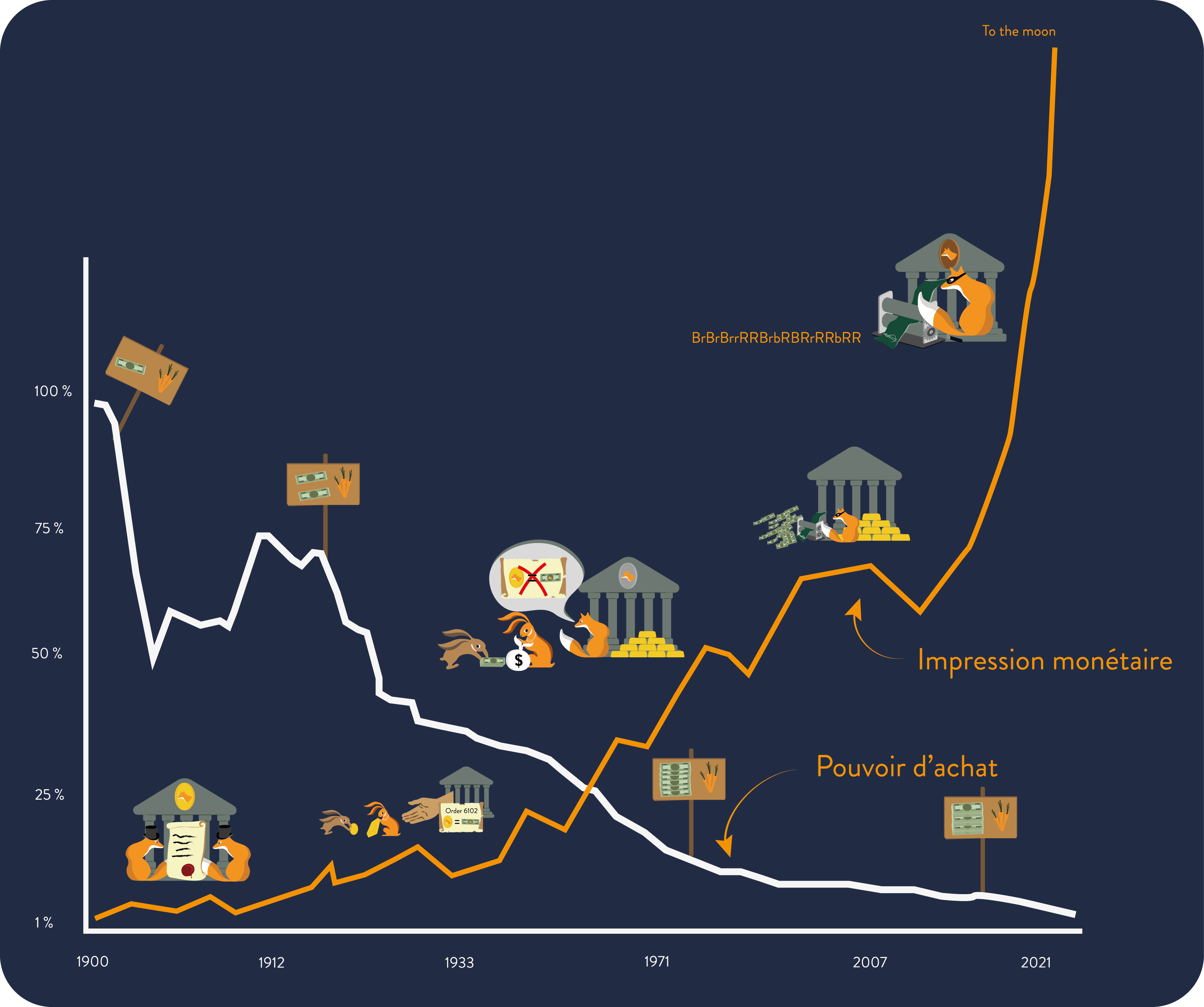 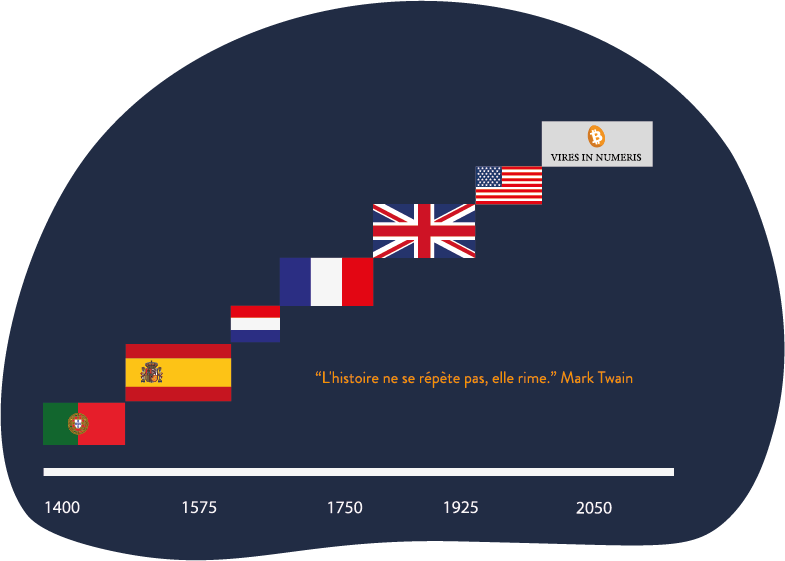 “Those who cannot remember the past are condemned to repeat it.”

The forced establishment of a fiat currency through the monopoly on violence is a political solution as old as our civilization.

The forced introduction of a fiat currency through the monopoly of violence is a political solution as old as civilisation. Throughout history, emperors, kings, dictators and regulators have understood the power of money printing and the slow but steady devaluation of a currency.

Once you’ve got your people hooked onto your money, you can manipulate the value of goods and services, monitor and limit the use, undertake projects without budgetary constraints, fund wars and maintain your grip on the system. Debt, taxes, corruption and manipulation become way easier.

In the digital world, the CBDCs, the Central Bank Digital Currencies, will carry on the features of paper money but without paper. Using zeros and ones, the control over money will expand with all the benefits of digital surveillance, the flexibility of programmable money and the death of cash.

We’re at an important turning point in History and it’s up to us to choose what we desire for our future, and the future of our children. Bitcoin’s opportunity at separating money and state will probably never come up again. Our turn to play.

Hyperinflation is a monetary event specific to fiat currencies. It is defined by a total loss of trust in a currency and a sharp rise in inflation due to authorities’ monetary printing. This is an old phenomenon and regularly happens. It’s essential to study it in order to understand the importance of a parallel system independent of any institution.

Step 1 – Loss of trust
Everything starts with a loss of confidence caused by a triggering event. It can be the end of a war, the enactment of costly social measures or simply the price collapse of a resource.

Step 2 – Collapse of the currency
The currency collapses. Government begins to be isolated and funding sources are drying up. The State turns to monetary printing to fund itself.

Step 3 – The vicious circle of money printing
You need more and more banknotes to buy goods, leading to the scarcity of paper money, then leading to more money printing, creating even more inflation.

Step 4 – The dollarization
Total collapse of the currency. The country creates a “new money” or uses another country’s money (dollarization).tion). 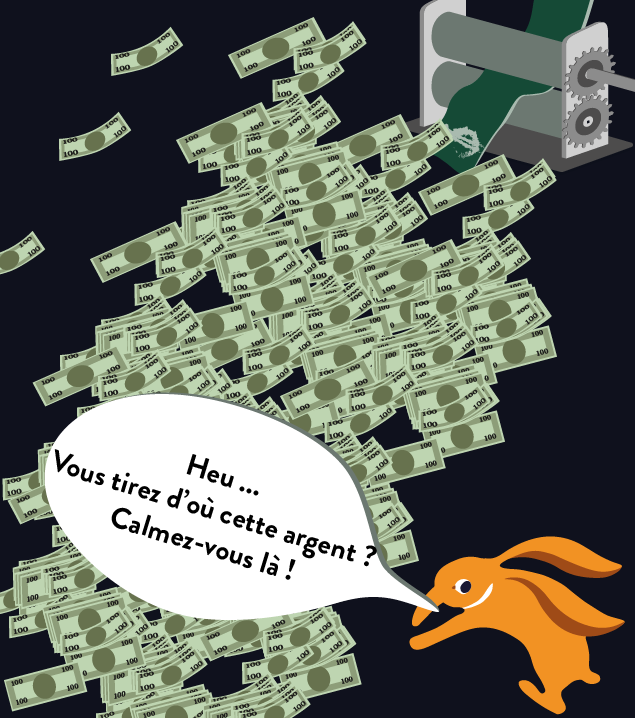 One of the most striking examples of hyperinflation occurred in the German Weimar Republic after World War I.

Germany had borrowed huge amounts of money to fund the war effort and not only Germany lost the war, but it had to pay billions of dollars in repairs. The month with the highest inflation was October 1923, peaking at 29,500% or 20.9% inflation per day. Prices doubled every 3.7 days!

It is said that in restaurants at that time, waiters had to announce menu prices every half hour to keep up with inflation. The German currency became so useless that some citizens chose to burn their banknotes, rather than wood, because it was indeed cheaper. 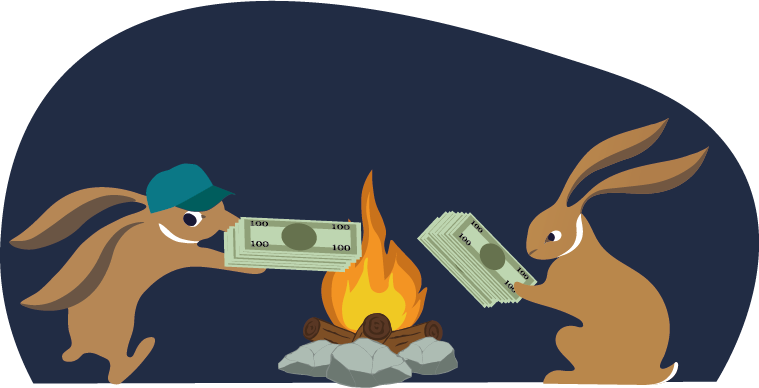 By far, the country which had the worst period of hyperinflation to date is Hungary after World War II.

Until 2000, Zimbabwe was self-sufficient in almost all its needs, except for oil.

In 1997, the Zimbabwean dollar collapsed by more than 72% after the government agreed to compensate the veterans of the independence war for an amount of US$450 million. Since the government did not have that much money at hand, it had to resort to money printing. In 2005, inflation was 586% and in March 2007, monthly inflation reached 50%.

In June 2007, the government reacted by introducing price control. The stores are emptied. Merchants can no longer afford to restock.

In April 2009, the Minister of Finance announced the suspension of the Zimbabwean dollar and allowed the use of various foreign currencies for trade. All bank accounts, pensions, financial institutions saw their balances evaporate overnight.

Bitcoin is a sound money. Thus, there is a finite and limited amount of bitcoins.

How many bitcoins are issued ?

No mysteries about Bitcoin, code is transparent.

At any time we know exactly how much bitcoins are in circulation. We can also precisely predict the weekly issuance of bitcoins and the future amount of it.

How many euros are issued?

21 million is the maximum limit of bitcoin issuance, we’ll get to it by 2140. Once reached, no more bitcoins will be issued when a new block is mined.

Due to lost bitcoins, unclaimed coinbases and geometric issuance reduction (mainly), there will never be 21 million bitcoins, just a little less. 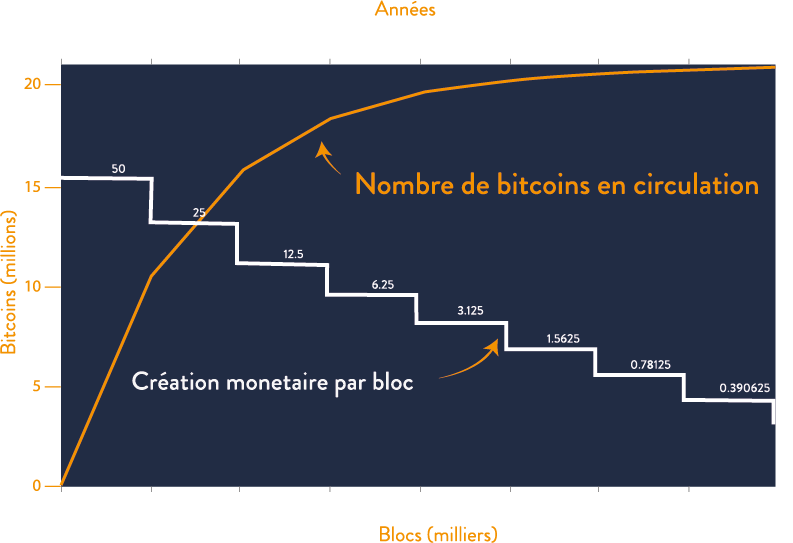 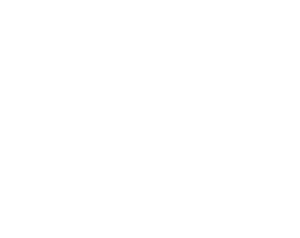 Bitcoin is absolute scarcity in the digital realm.

An unforgeable asset which you can easily move but never copy/paste.

Every 210,000 blocks, or around every 4 years, the amount of bitcoin issue per block is halved.

This reduces the supply of new bitcoins coming to the market, thus reducing the monetary inflation of the Bitcoin protocol.

What guarantees the 21 million bitcoins?

In Bitcoin, power is to the users. By running their nodes, they can participate along the rules and vote potential future changes to the network.

This consensus is made possible by the decentralized nature of Bitcoin, throughout the world despite differences in culture, religion, age, gender, etc.

Every 2016 blocks (around every 2 weeks), the Bitcoin protocol adjusts the mining difficulty to target a block creation every 10 minutes. This ensures that Bitcoin’s monetary printing remains stable over time.

That way, no matter a drastic increase or decrease in hashpower, in the long run, bitcoins issuance keeps its average level of 1 block every 10 minutes.

Next chapter
We use cookies on our website to give you the most relevant experience by remembering your preferences and repeat visits. By clicking “Accept”, you consent to the use of ALL the cookies.
Cookie SettingsAccept
Manage consent